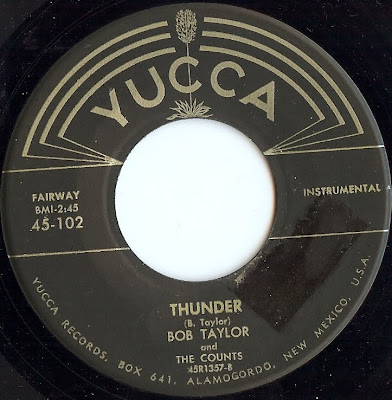 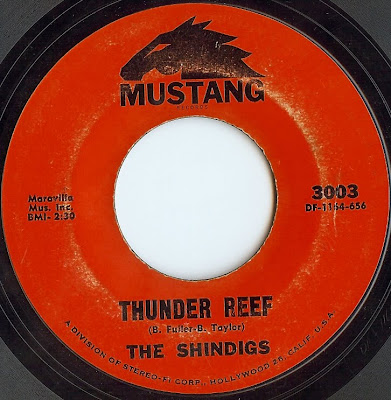 One of my absolute favorite guitar instrumentals is Bob Taylor's Thunder on the Yucca label. It has been comped countless times (and even makes an appearance on one of the Lux and Ivy Favorites). The B-side is great too, but man, Thunder kills!

A few years ago, I came upon an auction for a song called Thunder Reef, by the Shindigs. The song was attributed to Bobby Fuller AND Bob Taylor. The sound sample attached to the auction attested to the fact that it was indeed a "re-imagining" of Thunder! It took me forever to get the actual 45 (at a halfway decent price), and I present it here for you to check out.

I can't decide which one I like better, they are both such amazing records. There was definitely something in the water down in El Paso!

This version of Thunder Reef has never been comped to my knowlege. A version of the song has appeared on a few Bobby Fuller compilations, but it has an accoustic guitar sound that really takes the heat out of the song.

Give a (repeated) listen to the 2 versions below, and as an added bonus, there is a link to the other side of the Shindigs record as well, a great instrumental with a nod to the Wolfman!

(beware, the Wolfman side is REALLY scratchy)

The_Shindigs_-_Wolfman
Posted by Kogar the Swinging Ape at 11:46 AM 5 comments: 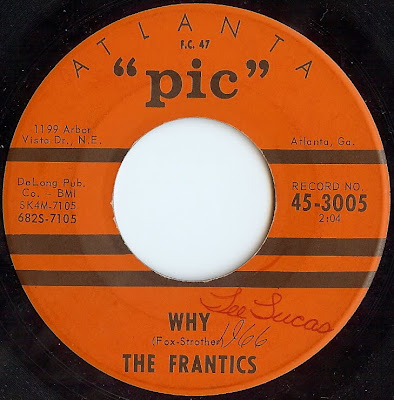 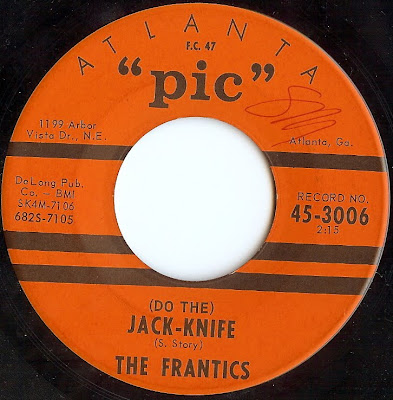 REALLY excited about this latest pur-chase! It's a fantastic slab of 60's awesomeness. Not only is the A-side a killer mid tempo 60's garage gem, but the B-side is a Lux and Ivy Fave that was featured on LAIF volume 12 (albeit in a lousy quality mp3...but it was the best I could find at the time thanks to Mop Top Mike).

Either side of this Atlanta 45 would be right at home on one of the Teenage Shutdown compilations. For a neat pic of what must be one of the band members parents house, check out Greg G's page on the 45 here:

So download and enjoy, and for those who have LAIF #12 take that jack-knife mp3, delete it, and throw this version on there as it is a whole lot better sounding!