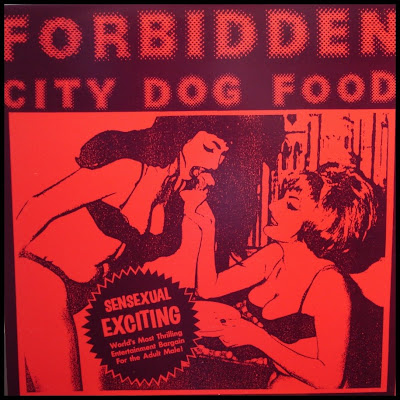 By request, here's a compilation LP that was taken from a tape that Lux Interior made many years ago, probably the late 70's is my guess.

It always amazed me that Lux was able to make tapes like these back then with all analog equipment. Today, I can wip up a compilation like this in a few hours (not counting the time it takes to pick the songs, and trailers, etc) on my computer (see my May 29th posting). It must have taken him forever to do this back then.

So legend has it that Lux made this tape. Then it got into the hands of some bootleggers, and they pressed it to vinyl.

Its a classic of its kind and is partly responsible for me making compilations all the time.

If you dig this LP, do yourself a favor and track down the compilations called MELLO JELLO. Basically the same idea, great music mixed with exploitation trailers. 2 volumes with a 3rd on the way (although it seems like its been delayed indefinitely). Also of note is the WAVY GRAVY series of LP's. Same idea...


Forbidden_City_Dog_Food
Posted by Kogar the Swinging Ape at 12:58 PM 16 comments:

Johnny & the Debonairs - The Bonecracker 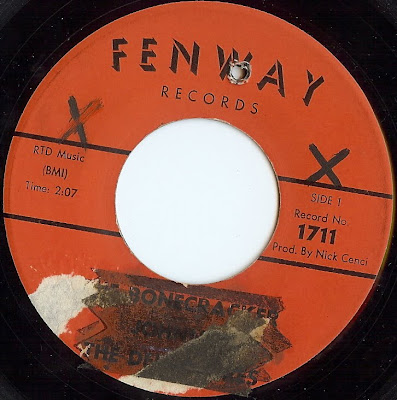 Here's a piece of Pittsburgh history. I guess this 45 was a big Pittsburgh dance hit probably played by Mad Mike back in the day (not this 45, but one probably just like it).

Pittsburgian's (?) were famous for label defacement to keep those pesky kids from knowing who the actual artist was or what the song title was, etc. But you should know ALL about that from checking out the liner notes to the fabulous MAD MIKE MONSTERS on Norton Records.

A little side note: Ever see records with holes in them like that? Ever wonder what the hell it meant? Well back in the day if a record didn't sell, it was returned to the distributor. The distributor would refund the record dealer's money and resell the record to somebody else. They wouldn't take returns on records with holes in them because they knew they had already been returned.

The_Bonecracker!
Posted by Kogar the Swinging Ape at 12:45 PM 7 comments: 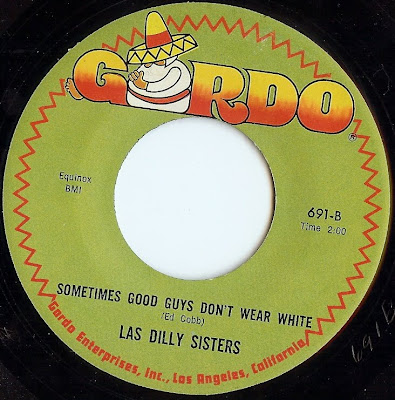 Here's a great 45 by a mexican "novelty" act, I guess you'd call them. Legend has it that their father flew them to California to cut this record. A steller piss take of Sometimes Good Guys Don't Wear White for the Gordo Record Label. I think it was on one of the Girls in the Garage Albums.

Here are Las Dilly's on one of the greatest tv shows of all time...

And here is a rip of the original 45 at the proper speed.

And here's a rip of it at 33 rpm's that make it sound like its by Las Dilly Brothers!

The Conclusion of The Tale of The Mad Daddy Acetates! 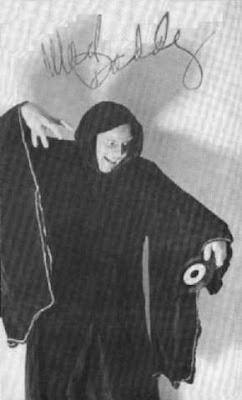 After barely escaping with my life, from another misadventure that I won't get into here, I made it back to the to the bus area to get back to my hotel.

To my dismay, I noticed the little man at the bus station waiting with a few other people. The thought of being on a four-hour bus trip with the sniveling little man made my stomach crawl and my head ache.

I hailed a burro and decided to take the train instead.

In my compartment I finally got to take a close look at the acetates. My hands shook as I took off the banana leaf wrapping. The proprietor had used the banana leaves as a sort of bubble wrap for the package.

I wondered to myself what could possibly be on these discs? Could they be long lost recordings of The Mad Daddy, aka "The Joker", like his lone 45, WHAT IS A FISTERIS/I LOVE A GOOD PRACTICAL JOKE? The mind reeled at such a prospect!

I took a look at the tan folders the acetates came in. They were labeled TRANSCO. A little quote below the name said; …A "SOUND" INVESTMENT. I chuckled at the horrible pun. According to the sleeve, the company was located in Linden, NJ.

Once back at the hotel, I decided that I had to listen to the acetates, just once! I had to hear what were on these discs! I had my primitive set up to transfer vinyl to compact disc ready and waiting for me.

I lit some candles and got to work.

Here is what I discovered…

Hmmm, this is interesting; its just 20 odd seconds of a sound affect the Mad Daddy used on his show! That's it! It builds slowly with an almost theremin/ethereal quality to it. It's a very recognizable sound if you've ever heard any of the Mad Daddy air checks floating around.

Well, this is a head scratcher! It's less than a second long, and it's just an exaltation of "Umumh!"

I have a number of Mad Daddy air checks and I do not ever remember hearing this on one of his shows. Why would he have gone into a studio to record this? What purpose did it serve?

This one held the most promise to me. By looking at the grooves, I could tell that the lengths of the tracks were different. It didn't say "all cuts identical" like the other ones did.

Track One: an almost playful sound that I can't quite place. It seems to bounce back and fourth between the speakers. Short beeps, like picking on piano strings.

Track Two: It's that trademark Mad Daddy Laugh! I don't know much about radio of the time, but I'm guessing this was a way for Pete Myers to get some sounds that he wanted for his radio show in NY. Since these are acetates he couldn't have played them again and again, they would have deteriorated. So he must have used these as a way to put them down onto tape?

Track Three: It's more laughter! But this laugh is the lesser of the two. It's not the "main" laugh he used, but the one he used between songs, etc.

Track Five: More otherworldly sounds, 15 seconds or so long. It sort of sounded like something from "FANTATSICA", the LP by Russ Garcia. The Mad Daddy used songs from this LP for his show.

Track Six: 15 more seconds of ethereal sounds, this time with women's voices. I think he used this during the final seconds of his show?

After listening, I sat back with a far off look on my face.

I had to digest what I had just heard. While not as earth shattering as I had hoped, the acetates were still a lost relic of a hero of mine. Relics that could have easily ended up as a joke gift to someone and lost to history.

The thought of this unnerved me. What other items could be out there, or could already be lost because people didn't know what they had?

This is what makes record hunting so amazing. It really is like excavating. And like excavating, sometimes you uncover gold, and sometimes, like this case, you just uncover something really cool.

I was hoping beyond hope that these acetates held some amazing lost track that Pete Myers had recorded, ala "Fisteris", but it wasn't meant to be. But what I did end up with was something that Pete Myers had held onto for a number of years until his death. Something he had personally used to produce his beloved radio programs.

I had snatched these items from the brink of destruction. That was pretty satisfying.

My only wish is that these had been uncovered before the Norton Records Mad Daddy CD.

If there is ever a volume 2 of WAVY GRAVY, maybe all the acetate's tracks can be included there.
Posted by Kogar the Swinging Ape at 8:41 AM 12 comments: