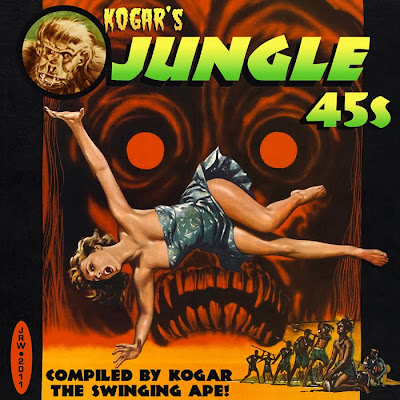 Here is a Jungle 45 compilation that was originally posted over at WFMU's Ichi Ban Rock n Soul blog. I had been posting the 45's one week at a time, but at some point, I got totally derailed because my vinyl to CD doohicky died on me. After a while I was able to replace said doohicky (thanks again Mucker), but at that point I needed to find a few great cuts to round out the compilation.

So here you go. All cuts taken direct from vinyl with the scratches and pops left in to add to the jungle coolness.

Thanks to J.R. Williams for the awesome cover that he put together (almost a year ago or so?!).
JUNGLE!
Posted by Kogar the Swinging Ape at 11:43 AM 11 comments: 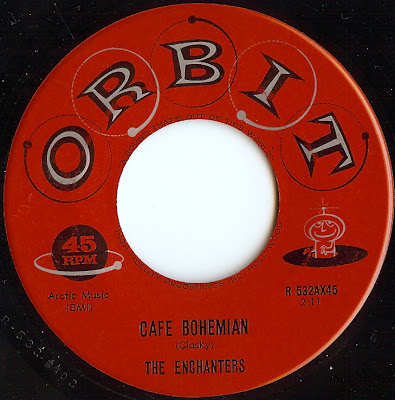 Here is the 2nd in a series of 45 anomalies. Collect records long enough and you stumble across these weird differences between 45's. The first of the series was the 2 different versions of Ward Darby's Safari 45. I think that post was originally over at Ichi Ban Blog.

This one is a real head scratcher. CAFE BOHEMIAN by THE ENCHANTERS. Both 45's look exactly the same and feature the same Orbit release numbers. But there are major differences in the songs themselves.

One version features a piano intro and lots of saxophone. Thru out the song there are a few "cafe bohemian" whispers here and there.

The superior version (in my opinion) features haunting vocals by Garnett Mimms and no piano intro.

The only real way you can tell the difference between the 2 records is by checking out the dead wax. The "sax" version reads this way: R . 532 . A . D 1. The "vocal" version reads: R . 532 . A . D 2. This second version also looks like it has a number scratched out right before the A. You can kind of make it out in the scan above.

Both records date from 1959 as far as I can tell and my guess is that the sax version came first due to the clean matrix number?

So take this in to consideration if shopping for this particular 45! I first found the sax version of this 45 many years ago and although it was cool to find in the wild, I really thought there was only one version of this song, not 2! It then took a few more years of digging to find the vocal version...

Give both a listen below...

Cafe_Bohemian_(vocal)
Posted by Kogar the Swinging Ape at 11:04 AM 8 comments: