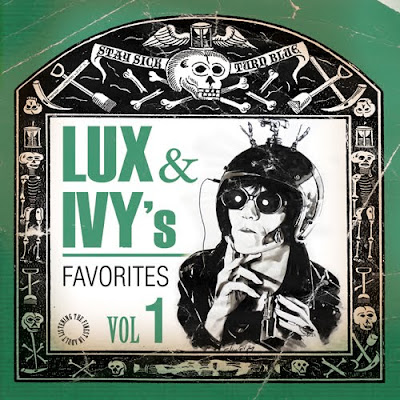 Here is the “remastered” edition of Lux and Ivy’s Favorites Volume One. It’s hard to believe that the Incredibly Strange Music book with the interview with Lux and Ivy came out almost 17 years ago! The details of going thru that interview and compiling this series is sort of old news so I won’t go into it again. But it is kind of crazy to think about how long ago that was.

I think it’s safe to say that this new edition has much better sound. I’ve also cleaned up some nagging things that always bothered me about the original; The spelling error on the Sid King track, the abrupt ending of Jennie Lee, and the overall awfulness of some of the mp3’s. Again, like I’ve said before, the originals (especially the first 2 volumes) were really never meant to be heard outside of a few friends so I didn’t really worry about it all that much.

HUGE thanks go out to Gil DeLuxe of France for his drawing of Lux for the cover. Gil contacted me after I asked if anyone would be interested in doing some art for the covers. My idea was to have Lux on the cover of Volume One and Ivy on Volume Two. I think he finished the artwork over 2 years ago, thanks for your patience Slim! As always, the layout and effects were done by Adam Fitch.

Volume 2 will be up next at some point, maybe within the next few months.

As for the future of LAIF, just as it seems as if the well has run dry, a new vein is struck.

Here is what is on the agenda coming up at some point (some sooner than later).

Volume 16 will be a double CD of Lounge/EZ listening type stuff. I’m guessing some people will love it, and some will be sort of confused. Some of the volumes flirt with a few exotica songs here and there, but this will blow your mind (if you have the right frame); harmonica lounge, monster movie themes, and overall wackiness.

Volume 17 will be what most of us are used to, rockabilly, blues, etc (actually, this volume is almost finished now, but I wanted to do the lounge edition first).

Volume 18 will be another journey into outer space (this may be a double cd as well).

That should take us in to next year and beyond. Also in there may be the remaster of volume 3 (with Ichiban regular J.R. Williams cover) and Volume 5 with another Haunted George cover.

As always no bootlegging, please. Just share this with friends and enjoy!

Volume_One
Posted by Kogar the Swinging Ape at 12:33 PM 9 comments: