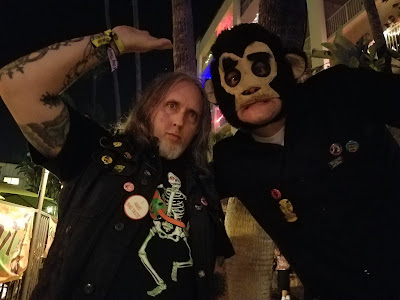 It’s only been a few days since Howie passed and it has been very difficult to wrap my head around it. Howie was SUCH an incredible person. He was filled with childlike wonder and excitement about so many things. He was the eternal teenager.  We developed a strong bond over the years that I will treasure always. Thoughts and events have been banging around in my brain since his passing and I’m not sure how I’ll be able to deal without my almost daily communications with him.

I connected with Howie back in the early 2000’s via Myspace of all things.  Our friendship sort began as “frenemies” as we were constantly bidding on the same things on eBay. I would send him a pic of something I won and he would freak out saying “you beat me on that one!” The reverse was also true just as many times. My wife would hear me shout out at the computer and she would check to see if I had fallen or maybe stubbed my toe; nope, just losing some auction to Howie!

One of the first times we met in person was at one of the WFMU record fairs. We chatted for a long while, but then we both had to get to business; he was selling records and I was buying. He also did a fair amount of buying himself.

While at this fair it was always imperative to shop at Todd Abramson’s table. After flipping through the records and amassing a pile I cashed out, but not before I saw a long time want. It was the Mad Mike Favorite by The Youngsters - ZEBRA on Sho-Biz records!  I thought the price was a little high, so I put it in the back of the box thinking, “well if I have any money left at the end of the day, I’ll come back!” That never works out the way you want it to. Right on cue, Howie comes over and starts flipping through the box. Of course he finds Zebra almost immediately, and with a loud exultation he yanked it from the box! “YOINK!”

Foiled again by that infernal PYRO! Side note, I did find that record years later for half the price!

As everyone knows, Howie LOVED records of all kinds. One listen to his show INTOXICA and you’ll hear everything under the sun. From some insanely rare garage fuzz monster from Europe to some dollar record you somehow missed while digging your local roadside junk shop.  He was always on the hunt for records. Whenever I went to a record show he insisted that I send him pictures of my finds. It was a ritual. A ritual that makes me smile to this day. Many messages would end with “I HATE YOU!” and a little laugh emoji. Just as many of my messages to him ended the same way, or with a simple, “UGH!”  Hardcore record collectors rib their friends like the most hardened comic roasting a pal at the Friars Club.

In his 61 years Howie lived a life most of us would take 200 years to live. I swear he only slept a few hours a night. I would be up at 5:30 or 6:00 east coast time and we’d be messaging back and forth. Mrs Kogar would exclaim; “who are you talking to at this hour?!” Before she asked the question she knew who it was, it was Howie. Stephanie was always concerned with Howie’s health telling me to tell him go to bed, eat a sandwich or drink some water.

When I was in Los Angeles for the Norton Records fundraiser we spent a fair amount of time together. My first day there I don’t think I slept for 24 hours (including the flight over). It was go go-go, go, go go-go, (ya know?) in Howie’s world. Eventually, a few days after the fundraiser I was all set (I thought) to appear on his show. It was a crazy time. I met him at the station at the appointed time and when he got there about 15 minutes before the show, he shouted, “oh no! I forgot all my stuff!” Since I was supplying the records he had it in his head that he wouldn’t need to bring anything. But what he forgot was all his cd’s that featured those iconic samples and station ID’s he would use during the show.

We raced back to his house and then made it back to the station a few seconds before he was to go on the air. In a rush, he gets all set up and moments before hitting the “on air” button he looks over at me and says: “Allright! Ready? I only want you to play records that I don’t have or that have never been played on the show!”  I wish I could’ve seen the look on my face, as Howie gleefully hit the button to start the show! This is the guy who has EVERYTHING! What was I going to do?!  The next two hours were complete insanity in the best possible way. I never expected that kind of curveball.  After losing it for a few seconds, I regained my composure and for the next two hours it was “do you have this? Yes. Do you have this? No!” After the show the adventure continued as we met some guy at a Denny’s so Howie could look through his records. There was never a dull moment in Howie Pyro’s (Sick Sick) world.

After I posted the show on my blog he made this comment over there:

“Thank you! Only a few certain people "rate" to have my blind trust to just throw records down live on the air, but obviously, you are one of them. Thanks so much for "reeling" with me! Haha Reeling brings REALing, and my show, like much of my public life is fueled by chaos, which is why i throw a curve ball to a guest sometimes before the show...to make it as electric & alive as possible. You were a total pro & I truly appreciate it.”

I could go on and on about various tales and cool times with him, but I’ll save that for other posts.

When Howie started getting sick we would talk on the phone and try to diagnose his ailments. Howie did not like doctors and told me that he was so afraid of hospitals because of experiences in NYC in the 70’s. He told me vivid stories of blood on the floor in hallways and other stuff right out of horror movies. I tried to tell him that not all hospitals were like the hospitals in NYC in the 70’s!

I was so happy when he found the right place to help him, but happiness turned to despair when I found out it was his liver that was giving him those pains in his side. I had issues with my gall bladder years ago and was hoping it was something related to that. Sadly, it wasn’t.

I will leave it to his family to describe anything else of what he went through these past months. There were so many ups and downs. So much hope as well as despair. One of the times I talked to him on the phone he had “gotten his voice back” and he sounded so strong. He sounded like the Howie of old, or like what he sounded like on his radio show.  We talked for hours like the old days. We talked briefly of his experiences, but we mainly focused on the usual stuff. What an absolute joy.

Back at the beginning of April I was in California for the memorial service of another friend, Steve Pallow. This allowed me to call on Howie at the apartment where he was convalescing.  I can’t describe how good it was to see him. He looked good, but he was weak from his previous battle with Covid related Pneumonia. We did what we usually did. We talked about stuff that we are into. We talked about Haunted George, and the memorial, and what a brilliant and amazing guy he was. We talked about Howie’s struggles, his ups and downs. It was just like he wasn’t recovering from a liver transplant. If you didn’t know he had been through that it was pretty much just like our average conversations.

He had a new pile of stuff to go through, which he did with glee. He showed me that new Vampira book and it was like he was seeing it for the first time. That was the teenager in him. Constantly there, excited by something new and cool. I imagine nearly every day was like Halloween morning for him. The Great Rat Fink had visited the night before and left packages of books, records, posters and photographs. A common refrain from him was “what about the paper?” He was fascinated with paper. Books, posters, comic books, monster cards, fanzines, magazines. Paper, paper, paper.

I didn’t want to tire him out (usually it was the other way around!), so after about 4-5 hours I had to leave. He gave me some magazines that he had doubles of and said “you’ve gotta check these out!”

That was thing; he was always so generous with stuff, especially information. He got off on and hearing stuff he didn’t know, and always flooded others with information THEY didn’t know. We shared some of the most amazing conversations over the years.

EVERY conversation with Howie led to some movie, book, comic, record that you didn’t know, or that you HAD to check out IMMEDIATELY. I will forever miss that amazing fount of unbelievable knowledge of everything cool, weird and interesting.

I will miss our frequent messages about something new that was coming out. The “oh my god! Did you see this?!” type of messages. Sometimes it got to the point where when I heard my messenger ping, I would instinctively reach for my wallet. But whatever it was that he “made” me check out, it was like a drug for my ears, my brain or my eyes.

Howie, I love you and will miss you for the rest of my days. I will always look back and remember fondly our time spent together and the conversations we shared.  Thanks for allowing me in to your world and being part of mine.  There will never be another like you… 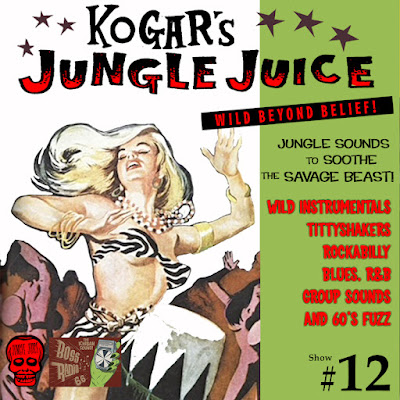 Posted by Kogar the Swinging Ape at 7:51 AM 1 comment: 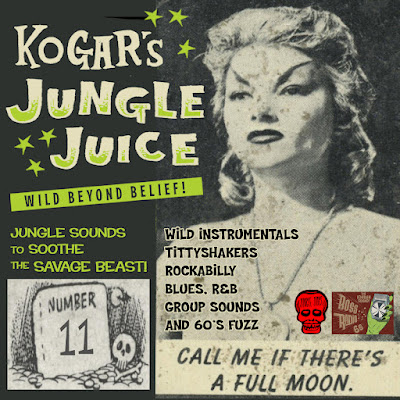 Here is episode number 11 of Kogar's Jungle Juice. It features the usual trash plus a special set of Songs Haunted George Taught Us. This image was sent to me by Steve when we were discussing doing covers for one of the Lux and Ivy's Favorites volumes. We went with the Invasion of the Saucermen image instead of this one. Thankfully Adam Fitch saves everything! So I used one of the unused images for this show. RIP Steve Pallow. Your influence will continue for a long time and you will be missed by many...
Show #11
Posted by Kogar the Swinging Ape at 9:16 AM 1 comment: 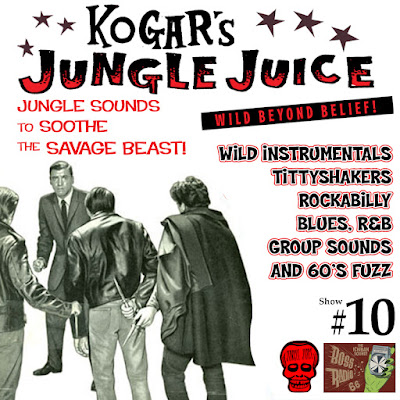 Posted by Kogar the Swinging Ape at 9:13 AM 1 comment: 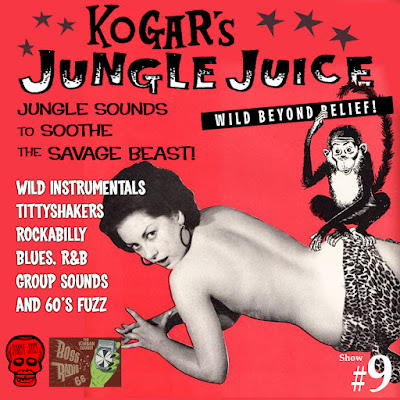