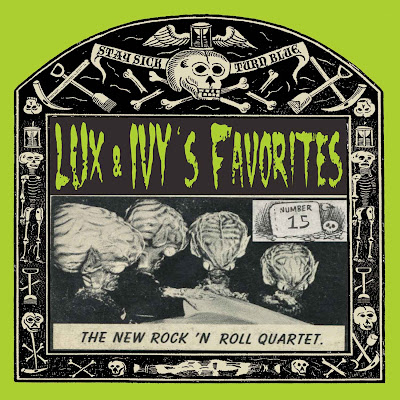 This volume is a mix of left over songs from that magical tape that came into my possession earlier this year and some other hold over songs that I've been waiting to throw on the series.

A HUGE thank you goes out to Haunted George for doing the cover for this volume. For those unfamiliar with his work, I highly recommend checking out his Myspace or Facebook pages (the URL's are part of the artwork when you download the volume). Be sure to check out his stuff. It's some of the more interesting/different music being produced today in a landscape filled with the usual garbagegarage (tm).

The intro/instrumental was reassembled from the original tape using the best sources I could find. You can read the whole story about "instrumental" on my blog. It shouldn't be too hard to find the track title if you really want to know. I kept it a mystery for the hell of it. The actual intro will be familiar with most everyone (i hope!). It was on the tape I was given and I had to laugh when I heard it. You could tell it was recorded using a cheap microphone that was more than likely held up to a television so it could be put on the tape.

Ruth Wallis - Ubangi. Wow, here is a song that i've looked for for years! In an old interview with the Cramps, Lux had attributed this song to someone named Ruth Fallen, and described the song in pretty good detail. I could never find this song anywhere. He called it YOU BANGI ME, I BANGI YOU (or something like that).

Then, as a result of that interview I gave to Dig It magazine, someone contacted me (thanks Colin!) suggesting that it was Ruth WALLIS! I tracked down the song, listened to it, and decided it HAD to be the song Lux was referring to. My guess is that the interviewer mis-heard Lux when he said the name of the artist. FALL-IN, WALL-IS, it could have been careless notes, or a bad transcription of a tape the interviewer had made.

Finding a good copy of the song was nearly impossible. It originally appeared on 78. I found a CD compilation of Wallis's songs with Ubangi on it. Great, right? A version taken from CD has to be good quality, right? Wouldn't you know it? The CD has a glitch on that particular song! Any mp3 rips of it sounded like shit. Besides the glitch it had an amazing amount of background noise.

After a while I found that it had been issued on a LP as well and through some further searching found a sealed copy for sale on ebay. This is the version on this compilation. And even then, it doesn't sound that great. I think it was mastered from the original 78 and not a master tape. The song even gets louder and softer, so I guess no one cared because it was for stag parties anyway!

Then I found a few more holdover songs from the original INCREDIBLY STRANGE MUSIC interview.

Red Hewitt and the Buccaneers - D.J. Blues; Lux never mentioned the artist, just talked about the song, and the lyric "music right out of the swirling all!" The first few seconds of this track remind me of a cramps song. So happy to have found this track. Red Hewitt was from New Zealand and released a few 45's on the Audion label (see scan on tracklisting).

Sheri Lee Douglas - Chime Bells; Never thought I'd find this one. Lux and Ivy swear this is KAY MARTIN singing, and I have to agree with them. It sounds exactly like her. The b-side of this 45 will be on the next LAIF volume.

Let's see, what else? There are a few more tracks from Forbidden City Dog Food as well as a bit from the Purple Knif Show. After listening to it again recently I heard a few seconds of something that never registered with me before. As the show ends, there is a few seconds of the deadly ones song, the mad drummer! It is such a great song, it HAD to be included on this volume.

Enjoy this volume, it might be awhile before the next one, but you never know!

My plans for remastered versions of the earlier volumes are still going according to plan. Volume 6 will be next, then volume's one, two, three and five.

Huge thanks go out to: Debbie D for doing a little sound voodoo on a bunch of the mp3's to make them sound better, Howie Pyro for the secret track, Bruce Milne, Colin Duff, Olaf Jens for helping me with a few songs, Steve Pallow, and Adam Fitch for his amazing graphics.