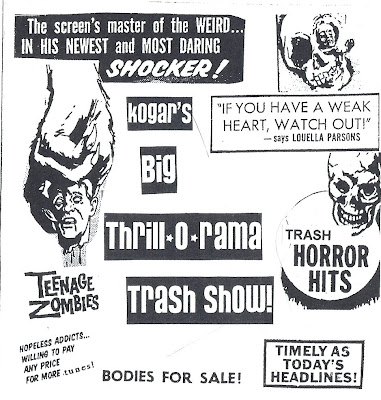 Here is a compilation I made for a local music board here in the New England area. It is the second in a series of compilations I have made that are a tribute to THE VIP VOP TAPES.
What are the Vip Vop Tapes? As legend has it, the VVT were a couple of tapes that were made by Lux Interior back in the late 70's for a friend to be played at parties, etc. They featured amazing instrumentals, R and B, garage, etc. Spliced between the songs, and sometimes IN the songs themselves, were amazing exploitation audio trailers.
It's a great listening experience, let me tell you. When I first heard them, it really sent me into collector overload. I wanted to identify all these tracks! The VVT had no track listing, making it pretty hard to identify certain songs (mostly instrumentals). Identifying those tracks has become a life long obsession. All the song I've identified have been comped on my series LUX AND IVY'S FAVORITES (I'll post those later at some point).
The two comps I've made as a tribute to the series (originally called NIM BOP COMP) both start with a track from the VVT as a starting point. I tried to pick songs that were in the spirit of those original tapes.
Besides being a part of the NOISE BOARD cd-trade this comp was originally made available on my Myspace page.
http://www.mediafire.com/?zcne2ydfkem
Posted by Kogar the Swinging Ape at 12:50 PM