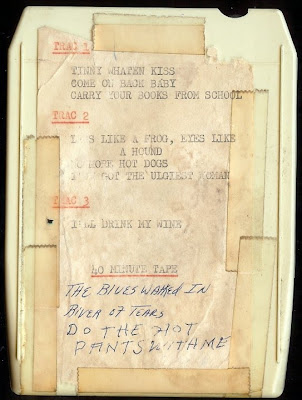 By popular demand here is the Hasil Adkins 8-Track Tape that I scored a while ago.

After receiving the tape, I went about procuring a working 8 track player. I found one on ebay for a good price and bought it. It was great because it was a self contained player/receiver.

The seller even included a free 8 track (John Denver!).

So after I got the player I tested out the John D. 8 track and it played fine. I got everything hooked up to my cd burner and got ready to do the transfer (the Hasil tape, not the John tape!).

The first thing I noticed with the Hasil tape was that the recording was very soft. I had to crank it to just have it be audible. It sounded like a 10th generation cassette tape. The head of the 8 track didn't look all that sturdy either, but this was to be expected for something that old and something that had hung around Hasil's shack for so long.

You gotta wonder why he made this 8-Track to begin with. Did he have a friend that wanted to rock out in his old 70's era station wagon?!

The other unfortunate thing is that the tape was near it's end when I put it in and would not go back to the beginning. So all I got was half of one song, and the last song. I tried to keep playing it, but then I got a burning smell and the tape started splitting a little bit. I think this was the beginning part of the tape and not the recordable part.

All is not lost, supposedly there are people out there that are 8-Track wizards that may be able to take the tape out and put in a better shell so that it will play. We'll see what happens with that.

So here is the one and 3/4's songs I was able to salvage.

River_of_Tears : Hasil released this song on his A.R.C. label back in the 70's. I have no idea if this is the same version from that 45 as I don't personally have a copy, and I don't believe this song has appeared on any of the other Hasil releases that I have. I don't know if it's the quality of the tape, but the guitar Hasil is using in this song sure sounds strange. Like he's using a wah wah pedal or something. If you listen carefully, you can hear an acoustic guitar, and what sounds like an electric guitar overdubbed?

Do_the_Hot_Pants_With_Me : I believe this is a different version than the one on Norton. It doesn't have as much cymbal work.

Well, enjoy the sounds. This is definitely for the Hasil Completist as the sound quality leaves a lot to be desired. But it is presented here as a piece of history for people that like Hasil's music. I basically boosted the volume using wavepad. I did not take out the tape hiss or do any other tweaking.

As a side note, please pick up Hasil's "new" LP on Norton Records called White Light/White Meat! Head over to http://www.nortonrecords.com/ and use their fancy new system and order it ASAP!
Posted by Kogar the Swinging Ape at 7:25 AM