Wrapped up and Tangled Up in The Cramps 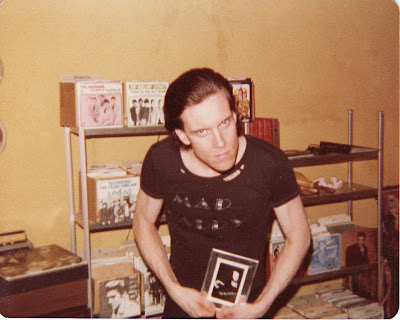 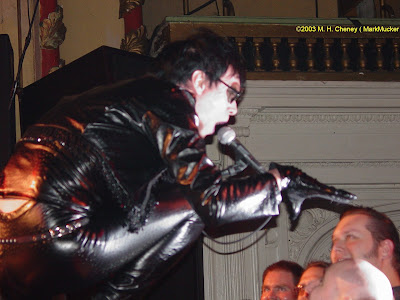 Well, this Wednesday would have been Lux's 63rd birthday. Here is an article I wrote for a canadian fanzine that has yet to materialize. I wrote it shortly after Lux passed away. I don't know if the fanzine will ever see the light of day, so here it is in all its "glory". Sorry if it seems all over the place, but when I was writing it, I was pretty emotional. Still am, I guess...

(pics above: a super young looking Lux with his homemade Mad Daddy shirt and a picture taken by Mark Mucker at the Trocadero show in Philidelphia.)

And I said I wished the Lord would hook me one day
Like this hook has hooked his fin
And on one Friday evenin’, he came into my soul
And hooked he me with his spirit

-The Reverend Charlie Jackson – Wrapped up and Tangled Up in Jesus

Hearing The Cramps for the first time completed my musical puzzle. Up until that point, music wasn’t a big part of my life. It was just something I listened to passively. There was nothing I was hearing that was really moving me. Certainly I had not heard anything that I would want to collect or devote any serious time to.

Growing up, I was into all the “weird stuff” you’d expect me to be into if you know me now. I liked monsters, books, books about monsters, monster movies, comic books, etc. I spent hours and hours scouring the TV guide trying to find horror movies to watch.

My parents had decent taste in music. My dad was a teenager in the 50’s and 60’s, a glorious time for music. We always had music in the house, but it was as most people listen to music today; as a background, something to fill the empty air. It may have meant something to them, but it didn’t connect with me. Blue suede shoes? Who gave a fuck about blue suede shoes?! I was a kid that liked giant monkey movies for god sake!

Myself, growing up in the 70’s, in New Hampshire no less, there really wasn’t a lot musically going on. For some, the 70’s were a great time for music. But as an adolescent without a car, you were kind of at the mercy of geography. All the radio stations I could tune in at the time played 70’s arena rock or dance music.

At some point, I started running with a different crowd and a friend introduced me to punk, and then later, The Cramps.

At first I didn’t know what to make of them. I simply could not comprehend what I was hearing. It sort of sounded like the music my dad was always playing when I was younger, but it was somehow new and exciting. It seriously confused me. Being in my late teens, Punk was a no brainer. It was loud, fast, out of control. But The Cramps were different. It just seemed more real somehow.

The Cramps opened up a whole new world for me. I was amazed to find a band that seemed to be influenced (at least in part) by the movies I grew up watching! You could just hear it in the music. You could see it in their look. Hell, you could even see it in their amazing logo.

Songs like WHAT’S BEHIND THE MASK had me doing double takes. Surely this song was based on a segment of TALES FROM THE CRYPT, the classic comic from the 50’s read by JD’s and wide-eyed innocents alike.

Pretty soon I was a fanatic; I had to have everything they ever put out. I went from release to release aurally devouring everything within earshot. It was Cramps overload.

It is at this point where you can distinguish two kinds of Cramps fans. The casual fan that goes to the shows, buys the records, etc., and The Cramps fan that delves a little deeper, tries to find out what made this band the way they were. A truly rewarding experience waits for those who wish to dig deeper into the history of the band and where they came from.

Since Lux’s passing a back in February, there has been a lot written about the band and Lux in particular. Many of the hastily written pieces that appeared soon after his death were shoddy and, to be quite frank, embarrassing. Some even got his age incorrect, others had no idea how to describe their music. It was a sad tribute.

As the weeks went by, and more and more people put their thoughts on paper, or on the Internet, it really helped me deal with my grief and I think it was helpful for others as well. People I talked to were shocked at how bad they felt about Lux’s passing. We all felt like we lost a family member. A lot of people were in the same boat. I mentioned as much to my amazing and understanding wife (who is also a fan) and she said something that has really stuck with me. She said; “Of course you feel bad, The Cramps, in some way, have had an impact on your life almost every day.”

She was right; a day probably doesn’t go by when I’m not affected by The Cramps. Whether it be putting together the Lux and Ivy’s Favorites series or hearing a Link Wray tune, buying some 45 on Ebay, or watching some exploitation movie; The Cramps have had a wild impact on my life. I can honestly say I would not be the person I am today if I had never listened to The Cramps.

Since Lux’s passing, I’ve been trying to sort out my thoughts about this band that I completely love and that changed the direction of my life.

The Cramps are more than a band. Lux and Ivy, the driving force behind the band, are history teachers for those who care to listen. Read their interviews, listen to their records, listen to the records they listen to, watch the movies they like to watch. If you do, there is a whole world that will open to you, if you are willing to take the time to explore.

I transitioned from a casual fan to an obsessed nut job when I heard, THE PURPLE KNIF SHOW. It had to have been 91 or 92. I saw the CD in The Cramps CD section. I didn’t even know what the hell it was. It had a picture of Lux and Ivy on it, and wording that said; RADIO CRAMPS. I had no idea what it was, but I had to have it. Maybe it was a live show or something. Most of you probably know, it was a radio show that Lux had hosted where he had complete control over the play list.

The stuff he played was mind blowing. The door to my musical awakening was creaking open even further, like you’d see in an old Boris Karloff movie. Here were songs that defied description; a song about a baby brother that crawled around on the ceiling and then flew away into space, another song about turkey decapitation, further still a song about a Bohemian Café that I search for to this day (not the record, but the physical place!).

Then shortly after that, it was the BORN BAD LP’s. Here were songs The Cramps liberated from the past and incorporated into their music. I knew some of their songs were covers, but this series of LP’s opened my eyes wider to what The Cramps were doing with songs and artists from the past.

The door opened even more.

Link Wray, Hasil Adkins, Andre Williams, The Mad Daddy, Mad Mike Metrovich, Ghoulardi, Russ Meyer, these are just some of the names they have introduced me to.

The door was blown off its hinges!

Soon, I was buying music like crazy. There were frequent trips to Boston; mail order; downloading; anything to get my music fix. Most, if not all of my disposable income went to the purchase of records, video tapes (later DVD’s), movie posters, etc. All of this can most likely be traced back to my discovery of The Cramps.

Over the years I saw The Cramps 8 or 9 times. A Cramps show was always an amazing experience. There was always something that happened to make it memorable. One time I got an empty wine bottle that Lux had drank from during a show, another time Lux used me as a lean post to get closer to the crowd (I spent the bulk of this show just looking up at him as he leaned on my shoulders to berate the crowd.), one time my friends and I fed him lines during the introduction for Alligator Stomp, another time a 5 foot tall girl physically attacked me for having the nerve to be standing in front of her (where I had been for 3 hours before she got there!). Blood, sweat, urine, wine, flying bodies, all par for the course at a Cramps show.

The last time I saw The Cramps live was a special one off show in NYC. It ended up being the last time they ever played in the city that sort of spawned them. That night they were on fire. Lux was like a man possessed. Drinking wine bottle after wine bottle, climbing speakers, bending mic stands.

At one point, while Lux was draping the club’s black curtains around himself (mimicking the Mad Daddy’s famous pose?), while teetering atop a 15-20 foot speaker stack. The crowd was going bonkers. All eyes were on Lux. What would he do next?

I guess I should say, all eyes weren’t on Lux, most of them were. I was watching Ivy. She was playing with here usual sneer, but you could see the concern in her eyes for Lux as he balanced precariously atop the speakers. For a good 5-8 minutes she watched his antics and only went back to torturing her guitar with reckless abandon when he was safe back down on the stage.

At times like that I think of how lucky Lux and Ivy were to have found each other. For over 30 years they have been together. They started a band, toured the world dozens of times, helping create an interest in music of the past while always seeming to be looking towards the future.

While traveling the country together in the mid-seventies they were on a quest for the soul of rock and roll. They found it in junk shops, record stores, record warehouses, distributorships, etc. Buying 45 records all along the way that held the key to their musical future. This time spent together would eventually lead them to starting this amazingly influential band.

Lux said in an interview he and Ivy did with Rex Doane on WFMU’s Fool’s Paradise, in which he believed that ideas for musicians are floating around in space. Those ideas are then picked up by entities and shot like lightening bolts into the heads of people, and that’s how you end up with crazy, awe inspiring songs. Basically alluding to the fact that humans need a little cosmic interference once and I while. This is a fascinating concept. How else do you explain The Musical Linn Twins Rockin out the Blues? Surely extraterrestrial influence abounds on this absolutely insane 45.

I like to think that even though Lux isn’t on this world anymore, that he just may have graduated to being one of those entities in outer space. And if that’s the case, we can only hope that his touch will be shooting ideas into people’s heads for a very, very long time.


Addendumb: Please do yourself a favor and check out Chuck Miller's Cramps Blog. It truly is an amazing page of Cramps related stuff. Hours of fun is guaranteed!