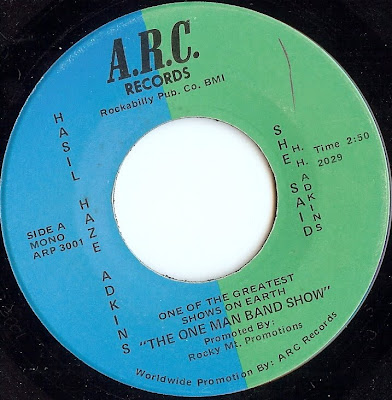 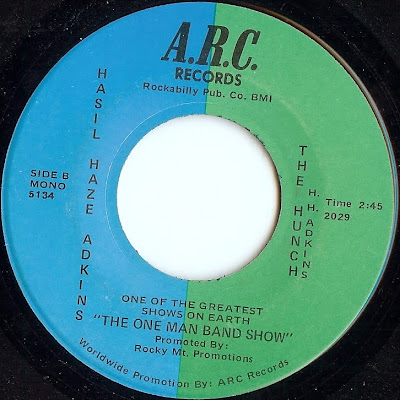 Sheesh, its been 5 years since Hasil died (I'd say murdered, but that's me). And just knowing he's not down in West Virginia hunching away in his shack makes the world a sadder place.

Hasil's music literally IS music to my ears. Some people recoil from it; it's too raw, it's too noisy...whatever, every time I hear his music a smile crosses my lips. The fact that Billy and Miriam from Norton Records rescued this guy from obscurity is one of the great music stories of modern times.

Be sure to check out my post over at the ichiban blogspot where you can download the Hasil Adkins tribute show that FOOL'S PARADISE broadcast back when Hasil past away. There are some great stories about Hasil from Billy and Miriam themselves as well as Joe Coleman, and others who knew Hasil. Plus some great Hasil tunes as well (including some unreleased stuff from the Norton Archives).

I was lucky to see Hasil play a few times. Once great, once not so great.

The great show was at the House of Blues in Cambridge Mass back in the 90's. I had gotten Hasil's autograph earlier in the day at a Tower Record performance (where hasil played a few songs, then threw down his guitar and walked out of the store for a cigarette. Seeing Hasil play guitar and sing right near a Madonna cardboard pic was kind of surreal!).

The thing I remember most that night was this FAT BLUES DUDE (tm) getting all uppity and almost starting a fight with a girl in the front row. The show was part of the FAT POSSUM blues tour. Hasil was the only, uh, "non-traditional" blues guy on the tour. So all of the other artists were, shall we say, more listener friendly than Hasil.

Hasil eventually get's cookin' and the crowd is jumping, hunchin' and generally getting wild. Said FAT BLUES DUDE (tm) leans over to me and shouts something along the lines of; "I've never seen anything like this at a blues club, it's unheard of!" His shocked admonishment shocked me more than what Hasil was up to on stage. I shouted back, "....then what the fuck are you doing here?!" He gave me a look and began elbowing this tiny girl who was right up at the stage. I guess she must have "hunched" into his enormous FAT BLUES DUDE GUT (tm).

So here I am seeing Hasil Adkins play, something I never thought in a million years I'd see, mediating a fight between a tiny rockabilly girl, and a FAT BLUES DUDE (tm). After a while things calm down, and wouldn't you know it, before long the FAT BLUES DUDE (tm) was bopping along to hasil's beat. I think he even apologized to the Rockabilly Chick.

Here are two Hasil classics on his own ARC label. I think this came out in 1976. Basically a reissue from some of what Hasil was pushing back in the 50's.

Thanks Hasil for all the great music....

Link to Ichiban post - http://wfmuichiban.blogspot.com/2010/04/hasil-adkins.html
Posted by Kogar the Swinging Ape at 9:31 AM