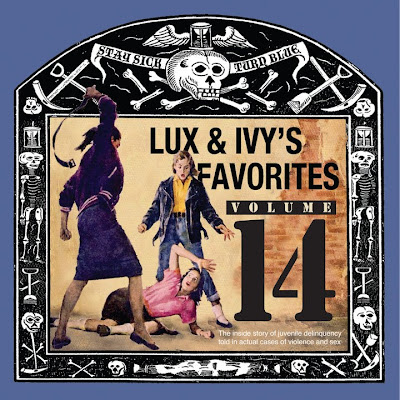 Well, Well….Here we are with Lux and Ivy’s Favorites Volume 14!

About a month ago, I had a little less than half of this volume together, but with no real theme. Just some left over songs that never made previous volumes and few other bits here and there.

Then a tape sort of fell into my lap that Lux had made for someone back in the 70’s. Thanks to this unnamed person, here is a new volume of Lux and Ivy’s Favorites.

I’d say that more than half of what is on this volume came from that hour long tape. There were even some songs left over for volume 15 (not to mention ANOTHER tape I have yet to receive). Most, if not all the songs on the tape were rockabilly, thus the vibe of the cover. I wanted it to have that “buffalo bop” kind of look.

The intro to Knockout is from the fabulous movie LOVE FROM A STRANGER featuring Basil Rathbone in an amazing performance. The movie was mentioned by Lux in the Ian Johnston Cramps book and is well worth seeking out. I thought it was a good way to open this volume.

Before some music nerd pipes up about “Duane De Santo”, yes, I know that’s not who really did that song, but that’s what Lux wrote on the tape case, so that’s the way it’s gonna stay!

The Four Plaid Throats. What is there to say about them? They are the Linn Twins of doo wop as far as I can see. The vocals on “The Message” are just INSANE. This group was mentioned by Lux in the newer Cramps book that came out a few years ago. Their other song will be on LAIF 15, and is a bit more, shall we say, reserved.

It took a while to find both of these songs by the “throats”. At one point I tracked down a bootleg cd with both sides of their lone 45 on it. I was psyched to find it, but disappointed as hell when I listened to it, and found that whoever mastered the damn thing couldn’t get the vocals right! They were popping all over the place. The version on this volume is taken from a Repro that must have come out in the 70’s and is pretty much the only way to hear it unless you can find an original. The fact that is repressed is kind of funny as I don’t really see the sock hop crowd really going for this little number.

I’ve also included 2 bands that Lux and Ivy produced, The Sickidz and The Mad Daddy’s. As well as Chris Spedding, who produced them at one point (Miss Betty being mentioned in some interview years back that I’ve since lost track of).

Lastly, I’ve included the theme song to FIVE MINUTES TO LIVE by Johnny Cash. This movie also popped up in the Ian Johnston book. I had this song years ago, but hadn’t managed to track down a copy of the movie until recently, and lo and behold, the version of the song used in the movie is entirely different then the officially released one! I think the movie version is amazing and features this great guitar solo by Merle Travis. I do not believe this version was ever released, so this is a rip from the dvd (sorry for this hiss).

Shout out’s also go to Adam Fitch for the amazing cover, Dirty Dacoit Dan, and Patrick from France for their help with this volume.

Enjoy this volume and hopefully 15 will be around before the end of the summer.

And again, no bootlegging! This shit is free, free, free!