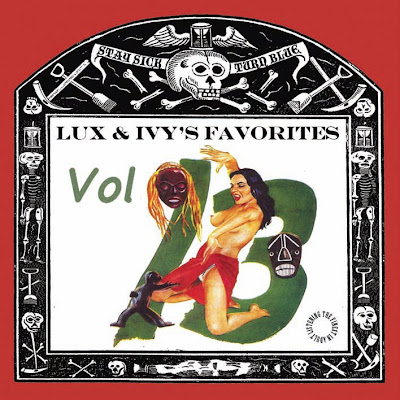 At some point, all of the other volumes will have artwork as well.

This one was a tough one to put together. It just took a lot out of me for some reason. As time goes on, there are less and less L and I interviews, etc to take from.

You'll notice a bunch of "modern bands" this time around. An interview with Lux and Ivy from the 90's was posted online some point after Lux's passing. L and I mentioned some current bands that they liked. Of these bands (The Mummies, The Oblivians, The Gories, The Demolition Doll Rods, the 5.6.7.8's), I picked songs that I thought fit in (i.e. Queen Bee Drag Racin because of the car theme, Pinball party because of the Cramps riff lifted in the middle of the song, they mentioned The Mummies, who "covered Sonic's tunes!"). I didn't think it was too much of a stretch to include them on this edition.

Lux also said in effect, "The most Cramps influenced band he had heard in a long time was Guitar Wolf." He mentioned that the album they were working on was called "Planet of the Wolves", so I chose that song. Plus with the theme of the last volume being outer space, I thought it made a good continuation of that theme.

I also lifted bits from some of their favorite movies; The Devil on Wheels, and The Horror of Party Beach (Zombie Stomp).

The Devil on Wheels was interesting in that I read an interview with The Cramps that appeared in "the ancient knowledge" book and it mentioned "cassette tapes" in their hotel room and that one of them was the "soundtrack" of the film The Devil on Wheels. I searched for a while, but came up empty on an actual soundtrack. I don't think one was ever issued. What I DO think is that Lux recorded the whole movie (it's a slick 70 minutes or so) onto audiocassette and listened to it while driving around!

The last thing I want to mention is that for years people have been asking me about covers for this series. I was really hesitant to do anything, because I thought that it would lead to bootlegging. I am adamant about these cd's being as free as free can be. There is no fucking way anyone should be paying for these. Download them, copy them for friends, but please do not sell these cd's!

In the long run, I decided to take an active part in coming up with "official" covers for the series. So that's all these are. I hope you like what we come up with. There also might be a guest artist or two. Keep an eye out for them, and the re-mastered editions of some of the early volumes of LAIF right here.

Cover concept by Kogar
Everything else by Adam Fitch 2009

Posted by Kogar the Swinging Ape at 4:18 PM